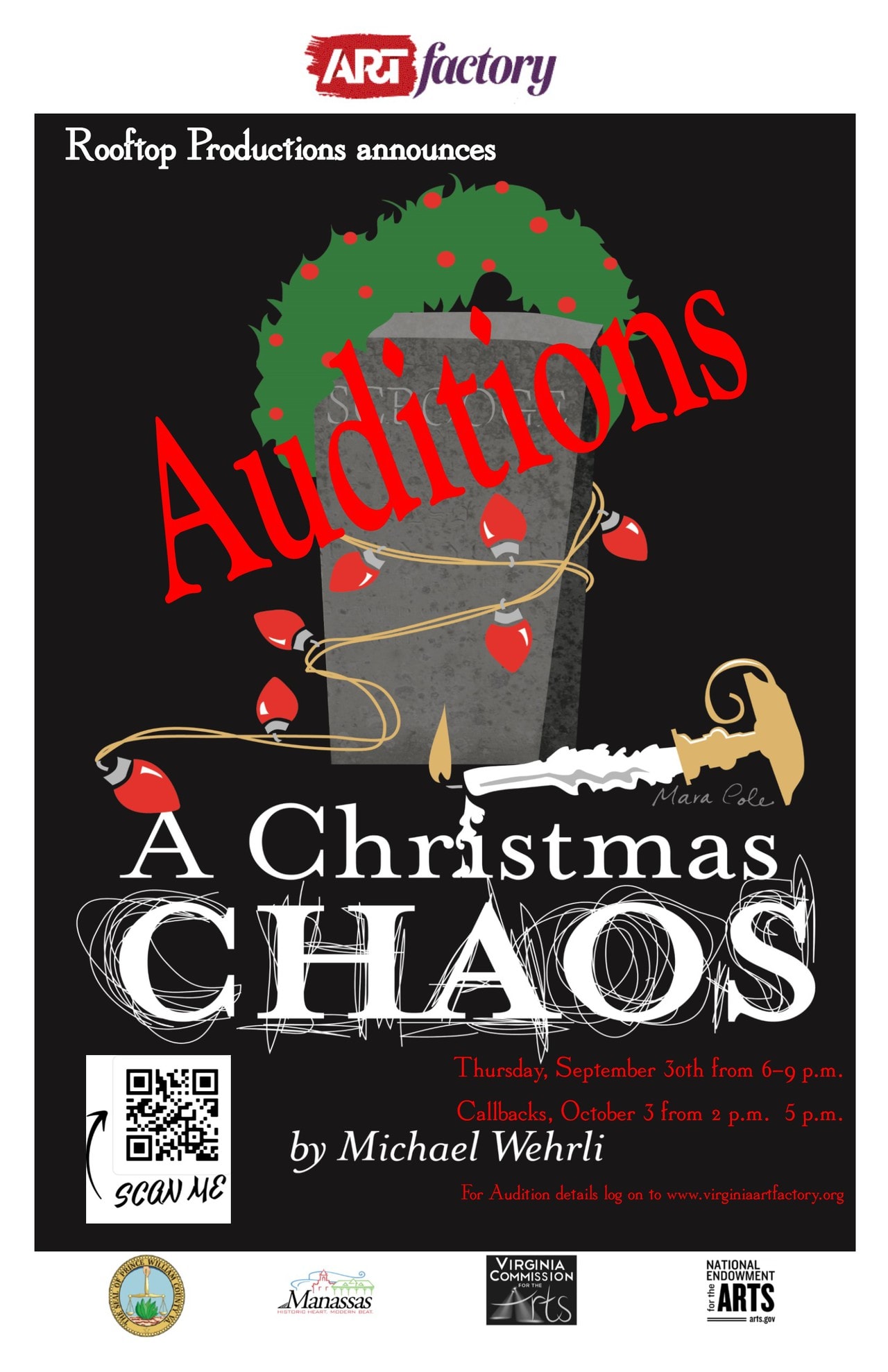 Rooftop Productions announces Auditions for A Christmas Chaos The Royal Shakespeare Company hasn't arrived as promised to perform their stirring rendition of "A Christmas Carol." So our intrepid band of hapless

The Royal Shakespeare Company hasn’t arrived as promised to perform their stirring rendition of “A Christmas Carol.” So our intrepid band of hapless actors and technicians must put together their own production in only seven hours! What a pity that they are not quite up to the task, even though they give it their all. Have you ever experienced backstage mayhem? Well, you haven’t seen anything yet! The play focuses on these poor but dedicated thespians doing their best while chaos is all around them: two kids fighting over who gets to play Tiny Tim, a confused actor who thinks she’s in another show, a haughty lead actor, one actor playing both Bob and Mrs. Cratchit, an out-of-control director, thrown together props and costumes, ridiculous scenery, and tons of flubs and confusion. Most of the actors in the show play multiple roles in this extremely fast-paced and physical comedy. Even the light and sound board operators are characters in the show! The play is a hilarious backstage comedy that pokes fun at the classic novel and everything that can go wrong with a theatrical production.

Audition and Performance Venue:  Kellar Family Theatre at the ARTfactory

Attend the dark, witty and Tony award-winning tale of love, murder and revenge set against the backdrop of Victorian London. Benjamin Barker, now known as Sweeney Todd, was one of

Attend the dark, witty and Tony award-winning tale of love, murder and revenge set against the backdrop of Victorian London. Benjamin Barker, now known as Sweeney Todd, was one of the most accomplished barbers in London. Unjustly exiled by the depraved Judge Turpin, Sweeney Todd returns 15 years later seeking retribution against the man who harmed his beloved wife Lucy and took his child. Todd’s quest for revenge leads him to Mrs. Lovett’s failing pie shop, and the two go into business together. Todd’s increasing blood lust inspires a new ingredient for Mrs. Lovett’s pies…and their unsuspecting customers will pay the price!

Haunting scores by Stephen Sondheim and book by Hugh Wheeler, Sweeney Todd is based on an adaptation by Christopher Bond. This production masterpiece is sure to both thrill and send chills up your spine. THIS SHOW IS RATED R.

Performances are Friday and Saturday evenings at 8pm and Sundays at 4pm – October 22-31 at the Hylton Performing Arts Center’s Gregory Theatre.